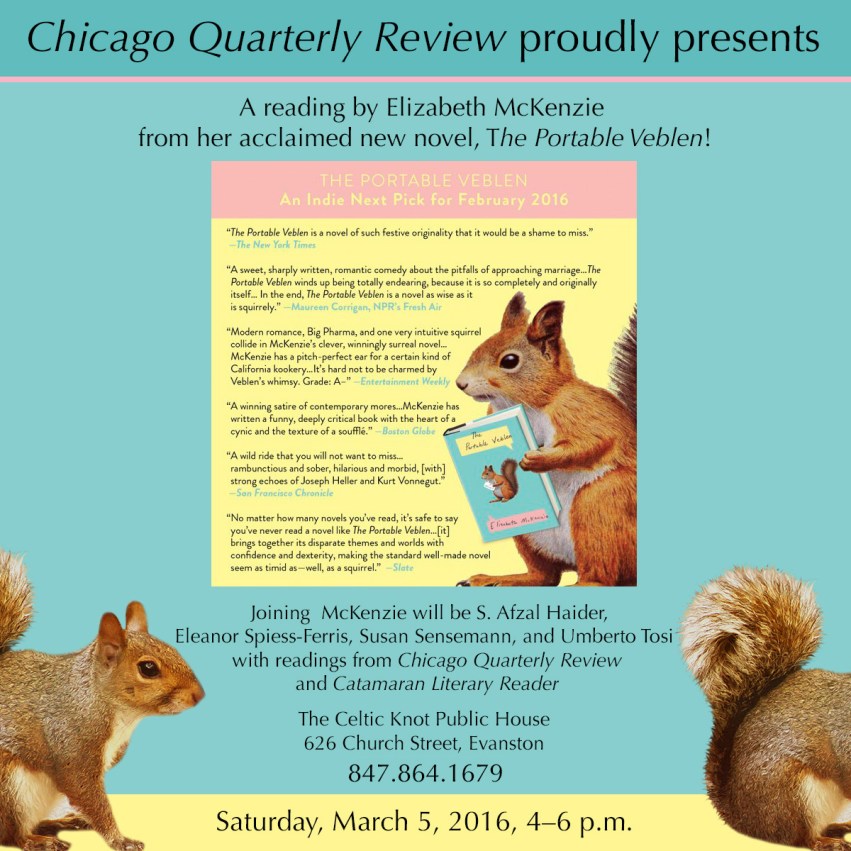 Review from Pakistaniaat  Syed Afzal Haider’s cosmopolitan Bildungsroman To Be With Her/Reviewed by Hillary Stringer, Patikstaniaat: A Journal of Pakistan Studies Vol. 3, No. 3

CQR editor Elizabeth McKenzie’s short story “Someone I’d like You to Meet” was featured in The Atlantic Magazine’s Fiction 2011 special issue: it was one of only nine short stories in a special issue that traditionally showcases the best of contemporary fiction.   McKenzie is also the author of Stop That Girl, a collection of short stories that was published in 2006 by Random House, and also MacGregor tells the World: A Novel, Random House 2007.    McKenzie has received a Pushcart Prize for her short fiction, and had a story chosen by Dave Eggers for his anthology Best American Nonrequired Reading. She is currently senior editor of the Chicago Quarterly Review. We’re looking forward to her next novel!

Jeanie has an essay in the forthcoming issue of Drunken Boat and also in the latest upstreet magazine. Her short stories have been nominated for the Pushcart Prize and have appeared in Timber Creek Review, Madison Review, Hunger Mountain, and upstreet, as well as the anthology The Way We Knew It. A graduate of the MFA in Writing program at Vermont College, she was formerly a sportswriter for the Chicago Sun-Times. Her journalism and interviews have also appeared in The Writer’s Chronicle and the Chicago Tribune, among other publications. A fictionalized version of “Cuts and Folds” was selected for The Parlor’s Emerging Writers Festival in 2009.

You can still find his story, “Something to Crow About” on the NPR site. Paul also has a story in the Santa Fe Writing Project and another, called “Another Shot at the Pennant” up at Boston Literary Magazine.

William Eisner’s latest novel Athena, set in the 1960’s, is a taut, suspenseful story driven by one man’s unrelenting pursuit to build the world’s most powerful jet fight.