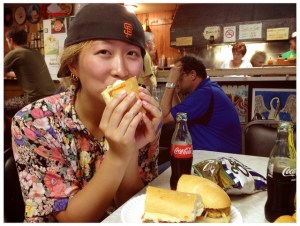 Chicago Quarterly Review intern Angela is a second-year student at the University of Chicago. She is double majoring in Economics and Art History.
On campus, she is involved in The Blue Chips, the U of C’s student investment club, Moneythink, a national nonprofit with which she tutors South Side high school students in financial literary, and the University Ballet. She is also founding editor of Dax Magazine, a spontaneous brainchild of hers and some friends that they decided would be the first experimental literary and arts magazine on campus. They figured that if any time were a good time to experiment with uncanny or unexplored method, form, or content…well, college would probably be that time. Prior to Dax, Angela also served as blog editor for on-campus, student-run literary magazine Memoryhouse.
Angela’s adventure with the Chicago Quarterly Review spawned from an innocuous email back in the beginning of April 2013 asking if there was any work she could help with. Five months, tens of submissions, and some pages of HTML later, the time has come for her to bid the magazine goodbye. She is incredibly grateful for having had the opportunity to work firsthand with such a distinctive and high-quality publication. She’d especially like to extend her thanks to head editor Elizabeth McKenzie for mentoring her through and through.
Angela is eager to see what the Chicago Quarterly Review puts together next. She can’t wait to get her hands on a copy of the upcoming issue.

Story Club Chicago is, according to the organization’s website, “like Fight Club. Except everyone tells stories instead of punching each other in the face. And everyone talks about Story Club. Everyone.”

Each month, the writers and performers of Story Club Chicago organize and host live lit performances, rewriting and rehearsing their pieces to a tee. In addition to Story Club featured pieces, shows include three eight-minute time slots of open mic opportunities for those in the audience who may be itching to read their from their latest work. Everybody wins.

Next Tuesday, September 17, at 8:00pm, Story Club will visit experimental culture center Co-Prosperity Sphere in Bridgeport. The theme of the upcoming show is “Duets,” each story being shared and performed by two tellers. The pairs to read include JH Palmer and Angela Benander, Katie Prout and Ellen LeKostaj, Anrew Marikis and Sarah Hollenbeck.

For those eager to share new work or those simply looking for a night of literary getting-to-know-you, visit the Co-Prosperity Sphere and spend your evening with Story Club. And talk about it afterwards.

the Department of Creative Writing

The event is free and open to the public. Books available for sale; cash or credit accepted.

NICOLE WILSON is the author of the chapbook Amazing Face (Phantom Limb Press) and the forthcoming collection Supper & Repair Kit (The Lettered Streets Press). A graduate of the MFA Poetry Program at Columbia College Chicago, she lives and teaches in Ohio.
DAVID TRINIDAD’s most recent books are Dear Prudence: New and Selected Poems (2011) and Peyton Place: A Haiku Soap Opera (2013), both published by Turtle Point Press. His other books include The Late Show (2007), By Myself (with D.A. Powell, 2009), and Plasticville (2000). He is also the editor of a A Fast Life: The Collected Poems of Tim Dlugos (Nightboat Books, 2011).
TONY TRIGILIO‘s most recent books are White Noise (Apostrophe Books, 2013) and Historic Diary (BlazeVOX Books, 2011). He is the editor of Elise Cowen: Poems and Fragments, forthcoming in 2014 from Ahsahta Press, and co-editor of Visions and Divisions: American Immigration Literature, 1870-1930 (Rutgers University Press, 2008). He also is the author of two books of criticism, Allen Ginsberg’s Buddhist Poetics (Southern Illinois University Press, 2007) and “Strange Prophecies Anew” (Fairleigh Dickinson University Press, 2000). He directs the program in Creative Writing/Poetry at Columbia College Chicago and co-edits Court Green.

This Saturday September 7, visit the Book Cellar in Ravenswood to catch a brief glimpse into the minds of Kevin Smokler, author of Practical Classics: 50 Reasons to Reread 50 Books You Haven’t Touched Since High School.

San Francisco-based writer Kevin Smokler is currently serving as writer-in-residence until next week at the Ragdale Foundation in Lake Forest, IL; assumedly, this is a good time to catch him while he is still in the Midwest. He will speak about his recent essay collection, Practical Classics. Smokler walks the reader through 50 different classic novels oft tied mentally to dimly lit, half-asleep high school English classrooms–think The Great Gatsby, Catcher in the Rye, To Kill a Mockingbird–and show that they have something valuable to say about how to raise children well, or how to find a fulfilling career, or other adult matters a 16-year-old English student might not glean with equal enthusiasm from Scout Finch in a ham suit.

Smokler will speak at 4:30pm CST at the Book Cellar in Ravenswood. Visit his website, www.kevinsmokler.com, to learn more about the author and his works.